WATCH: Know-it-all liberal has NOTHING to say after this... - The Horn News 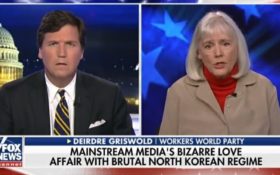 The liberal media has spent days fawning over the brutal North Korean regime.

Dozens of liberal newspapers and cable news outlets — from CNN to The Washington Post to MSNBC to PBS — went out of their way to compliment and praise North Korea’s brutal dictator Kim Jong Un and his family.

For days, the liberal media heaped praise on a bloodthirsty communist dictatorship responsible for the torture and murder of hundreds of thousands of innocent people.

Fox News’ Tucker Carlson had something to say about that — and he wanted liberal leader Deirdre Griswold, the head of communist organization the Workers World Party, to hear it.

She tried to defend the brutal repression of millions and claim it’s a better system than America — but she looked stunned when Carlson turned the whole thing around on her.

That’s when Carlson nailed her.

“So, since you’ve been to both countries, I’m just wondering. One is obviously the world’s latest Stalinist regime; it’s pretty rigidly Marxist, that’s North Korea. While South Korea is floridly capitalist; it’s a market-based economy, which of course you reject,” Carlson said.

“Which country would you rather live in personally?” Carlson asked.

“I won’t try to answer or debate you on everything you’ve said…”  Griswold replied. Ouch.

Carlson responded, “I’m not trying to debate you. That’s a sincere question.”

“I only have a couple of minutes,” Griswold said, causing Carlson to laugh. “You’re not going to answer the question?”

When Griswold tried to tell Carlson that the people of North Korea were free and prosperous, and Carlson ripped her again.

“If they’re so free, why can’t they leave?” Carlson asked.

Griswold, visibly flustered, again refused to answer the question — and became so panicked in general, she refused to acknowledge Carlson at all.

You can watch the exchange here —