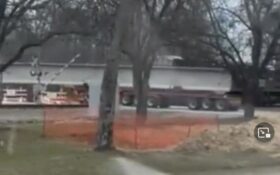 Two train employees were injured in Tennessee when a train hit a semi-truck that was sitting on the tracks waiting for a traffic light to change, causing three locomotives and 10 railroad cars to derail.

The collision left “a disastrous mess” Tuesday in Collegedale, a suburb of Chattanooga, the Hamilton County Office of Emergency Management said in a statement. The freight train hit a truck carrying a 134-foot (41-meter) concrete truss bridge beam, the statement said.

A train has derailed in Chattanooga, Tennessee after a semi got stuck on the tracks. pic.twitter.com/H5EoDZONfa

The truck was stopped on the railroad tracks waiting for the light to turn green, according to the Tri-Community Volunteer Fire Department. Officials said when the crossing arms were activated the driver attempted to clear the tracks but was unsuccessful.

“Collegedale has dodged a huge bullet. That is a tragic accident that could have taken many lives,” Jim Hall, former chairman of the National Transportation Safety Board, told WTVC-TV.

The crossing was blocked by the crash and an investigation is underway. Several agencies responded, including a team to clean up hazardous materials like leaking diesel fuel from the locomotives.