Watch: George Santos no longer denies the footage of himself in drag - The Horn News 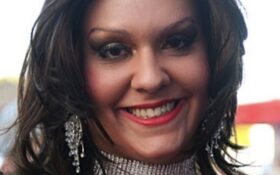 Rep. George Santos, R-N.Y., has been exposed for lying about his heritage, his education, and the circumstances of his mother’s death.

Since admitting to serial fabulism, Santos has also been haunted by other past scandals, from charges for check fraud to photos of himself in drag.

Santos responded to the photo the following day. He called the rumor “categorically false.”

“The most recent obsession from the media claiming that I am a drag Queen or ‘performed’ as a drag Queen is categorically false,” Santos tweeted Thursday.

“The media continues to make outrageous claims about my life while I am working to deliver results. I will not be distracted nor fazed by this.”

Since then, it’s only become harder for Santos to issue these denials. In videos leaked over the weekend, a drag performer can be seen walking through Rio de Janeiro, and the figure is allegedly Santos.

One reporter asked, “Were you ever a drag queen in Brazil?”

At La Guardia airport, Santos told reporters, “No, I was not a drag queen in Brazil, guys. I was young, and I had fun at a festival. Sue me for having a life. Guys, look. Look. This isn’t how you conduct an interview.”

George Santos denies he was a drag queen, but admitted: “I was young and I had fun at a festival.”

Santos is basically saying drag wasn’t his career, but he did enter drag contests in Brazil as Kitara Ravache. pic.twitter.com/alnXFIkrs6

Santos caused some confusion with his remark about “fun at a festival.”

One CNN contributor asked, “So, is that a denial or a confirmation?”

According to sources in Rio, Santos was apparently performing in drag sometime between 2005 and 2008, although he may not have done drag very frequently.

While living in Brazil, Santos also faced charges for alleged check fraud, with Brazilian authorities announcing their plan to reopen the investigation.