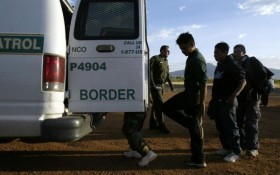 The warning about the southern border crisis started with President Donald Trump back in 2016.

More than two years later, illegal immigration seems to be reaching an all-time high. With Trump’s wall plans being stymied in the courts and by “do nothing” liberal lawmakers, the American people are taking matters into their own hands.

For the first time ever, a private section of border wall is being built on American soil, spanning approximately a half-mile, according to The Washington Times.

He raised more than $20 million across roughly 265,000 donations. That’s about $83 per donation on average.

According to the private group behind the building, called We Build The Wall, the half-mile section will have been completed at a faster rate and for less money ($8 million) than the government has historically done.

It’s an accomplishment that will likely infuriate Democrats across the country — instead of listening to their citizens about the border disaster, liberals have wished the problem away.

The completion of the wall is now trail blazing a path for American citizens to be able to erect the wall, with or without the help of establishment politicians. Where the government can’t or won’t budge, citizens are stepping up to problem solve in a major way.

The wall is specifically being built across a border of Arizona and Texas, a problematic gap in the past.

Kolfage claims that up to 100 illegal immigrants could sneak into the U.S. each night over the half-mile section, with drug lords funneling in deadly narcotics worth up to $100,000 during that same time.

The half-mile section will be finished Thursday. It was constructed in secret over the weekend to prevent liberal protesters from organizing and stopping it’s construction.

Kolfage, who has hinted at building 234 more miles of fencing with the help of regular Americans, unveiled the nearly complete wall on social media: