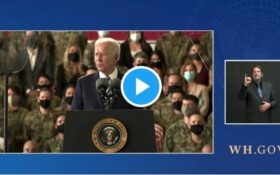 For years, conservative critics have questioned President Joe Biden’s mental sharpness and his ability to run the White House at his advanced age.

Now, a surprising video from Biden’s international trip to the United Kingdom has caused a stir — but it’s not something you’ll see on the mainstream media.

At 78-years-old, Biden was the oldest person ever inaugurated as president of the United States.

During a speech Wednesday to U.S. soldiers stationed in Europe, Biden forgot to give them an “at ease” order — and admitted he struggles to even remember he’s president.

“When I was 14, if you’d…” Biden begins, then realizes the soldiers are still standing at attention.

The misstep comes just weeks after another controversial video showed Biden slurring his words and allegedly chewing his dentures.

According to insiders, Biden — just a few months into his first term — still hasn’t committed on running for reelection in 2024.

Perhaps he finds it all too confusing.