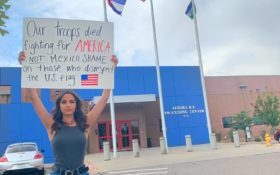 Ever since President Donald Trump took office, liberals have been on a crusade to destroy America.

With every word that comes out of their mouths, they’re proving that they care nothing about the nation, its flag or the people who defend it.

They summed up their feelings for America in 3 vicious words: “F*** the troops.”

And it gets worse.

At a demonstration outside an Immigration and Customs Enforcement (ICE) facility in Colorado this weekend, leftist protesters tore down the American flag and replacing it with the Mexican flag. They also screamed, “F*** the troops” at a conservative blogger.

And it wasn’t a mistake. They didn’t get caught in a “gotcha” moment.

They were proud to have said it.

The ugliness began when Ashley St. Clair, a conservative journalist, showed up to the protest and expressed her support of law enforcement and the American flag.

It made the liberal demonstrators screaming mad.

The group was led by an animated woman, who screamed in St. Clair’s face that she was a “white supremacist” because she said she was proud to be an American.

She tried to provoke St. Clair, who remained calm throughout the entire interaction.

Then, the woman then began to use a nearby street sign as a stripper pole, chanting “F*** the troops!”

Want to see what liberal voters want in 2020?

The video below will show you everything you need to know —

I went to the Aurora ICE facility where deranged leftists took down the U.S flag & raised a Mexican flag in its place

These lunatics called me a white supremacist simply for supporting our flag and our troops. VC: @DC_Draino pic.twitter.com/M284ygkXl7