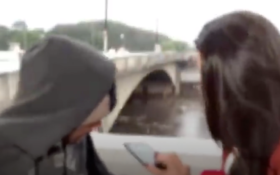 CNN is typically called out for running fake news.

But even they couldn’t have made this up.

CNN journalist Bruna Macedo was reporting live when she was mugged at knifepoint — and the incident was caught on video then quickly spread across the internet like wildfire.

The video began with the suspected mugger lurking in the background of the broadcast behind Macedo, who was standing along the Bandeiras Bridge in Brazil. According to Independent UK, Macedo had been reporting on the increasing water levels of the Tiete River when the man reportedly approached her with a knife.

The suspect engages Macedo, who backs away and gives up her phone.

You can watch the video from CNN Brazil below:

Rioters aren’t sparing any network, whether liberal or conservative.

Following the police-involved death of Rayshard Brooks in Atlanta, a CNN film crew covering the Wendy’s riot was attacked by a man wielding a skateboard. During the event, a crowd of agitators would be heard shouting, “block the camera.”

This is when people started breaking the glass at Wendy’s. You can hear “block the camera” being shouted at my colleagues, while another person tried to block my cell phone video. The people blocking our photojournalists ending up taking a skateboard to that camera. pic.twitter.com/A5Oipl6Gfz

Even Fox News reporters are being targeted.

A mob of angry liberal protesters drove longtime reporter Leland Vittert from the George Floyd protests, but not before reportedly punching one of his bodyguards in the face while the harassers drove the network from the scene.

Following the incident, Vittert called it the “scariest situation” since he’d been in since being chased by a mob in Cairo, Egypt.

Veteran host Andrea Mitchell had been reporting on the “autonomous zone” in Washington D.C., when she escaped an attack by a man who attempted to crash the set.

As the number of attacks on journalists increase, liberals are setting a dangerous precedent by calling to defund the police — which in the end leaves journalists vulnerable to the ongoing nationwide unrest.