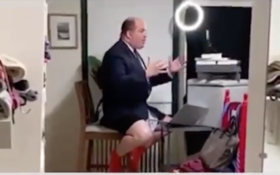 CNN’s Brian Stelter has made a career for himself by attacking former President Donald Trump and conservatives.

But this week, he made headlines in the most bizarre of ways.

In an attempt to “humanize” the news,  footage was unearthed of the CNN anchor doing his show… pants-less.

Why would any self-respecting media member do this?

The segment began with him covering the story of an ABC reporter who was caught during a report without his pants on. In April 2020, “Good Morning America” reporter Will Reeve made the blunder on live television that caught the attention of viewers across America.

*in the most hilariously mortifying way possible https://t.co/2NQ85QEJVr

So CNN’s Stelter decided to share a clip of himself also being recorded without pants during a segment with colleague Wolf Blitzer.

“… hey I can relate,” Stelter said. “This was me live on CNN, with just 2 minute’s notice, talking with Wolf Blitzer about Trump’s Twitter account being banned.

You can watch the clip below. Warning: A pants-less CNN anchor appears…

why would Stelter air this clip of him doing a live shot without pants on his own show? pic.twitter.com/uiR9Y65aMm

Wind of this video is swirling around social media fresh off the heels of Stelter’s “war of words” with Donald Trump Jr.

Trump Jr., during his speech at CPAC 2021, compared Stelter to Mr. Potato Head.

While Stelter may have felt the lasting sting of the political jab, he claims he intentionally held his tongue on responding.

Last week he made sure to let his viewers that he sought the high road during his “Reliable Sources” program.

“I thought of some really cunning responses, really clever ways to reply, some way to go viral. But then, I stopped,” Stelter said.