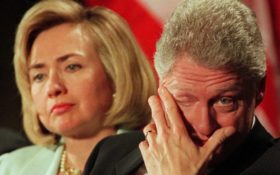 Former President Bill Clinton has made some outrageous claims in the past, but The Washington Post is calling him out for the lies he told during his recent interview with NBC. This is the interview where Clinton floundered trying to respond to questions about his sex scandal with White House intern Monica Lewinsky.

The newspaper featured the now-infamous interview in their column “Fact Checker” that investigates the accuracy of claims made by public figures. Needless to say Bill didn’t fare so well.

Columnist Glenn Kessler awarded Clinton with three Pinocchio’s out of four – a rating Kessler says is riddled with “significant factual error” and should be considered “mostly false.” While he condemned much of the interview, Kessler focused on two of Clinton’s statements that were particularly untrue.

The first: Bill’s claim that he “left the White House $16 million in debt.”

This statement directly contradicts what the former president said in a 2014 interview, where Bill and Hillary were only “several million dollars in debt.” Still a lot of money, yes, but not as much as claimed.

Hillary filed Senate financial disclosure forms in May 2001 that show the Clintons owed millions of dollars in legal fees to law firms such as Skadden Arps and Williams & Connolly. But this number likely only reached about $4-5 million, Kessler states.

There’s another problem with this number, however, because the Senate disclosures do not include family homes, and the Clinton’s had two at the time – a $1.7 million five-bedroom and a $2.85 five-bedroom.

Even if Bill had included his mortgages for these houses in his debt, the number would not reach close to $16 million. And Kessler adds “it hardly seems kosher to count such fancy lodgings.”

He also points out that when they left the White House, Hillary already had an $8 million book deal and Bill was set to earn $125,000 per lecture on a tour around the world.

The second claim Kessler calls out as false: Bill said he “had a sexual harassment policy when I was governor in the ’80s.”

While this claim is technically correct, a 1998 deposition between Bill and prosecutor James Fisher reveals why Kessler is calling Clinton a liar.

Fisher asks, “Mr. President, the criteria there under Roman numeral III were actually federal guidelines that you were adopting as the policy in the state, correct?” Bill’s answer: “Yes.”

In other words, Bill tried to brag about a policy implemented in Arkansas that simply complied with federal guidelines – it’s not as if he was looking out for the wellbeing of his female employees.

“He did have large legal debts, perhaps several million as he once said, but $16 million is clearly wrong. In any case, he and his wife were able to quickly dig themselves out of that hole,” Kessler concluded. “As for the sexual harassment policy, he was simply implementing federal guidelines — and it’s an odd thing to brag about, given the circumstances.”

So for this interview, it’s clear that Bill told quite a few lies. But it’s not as if anyone is surprised…