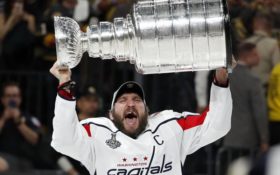 Alex Ovechkin put both hands to his head and screamed while he left the bench and skated into the thick of the Washington Capitals’ joyous celebration.

And right before Ovechkin hoisted the Stanley Cup, the Washington captain put both hands on his head again in a gesture of disbelieving ecstasy.

After striving through 13 of his franchise’s 43 seasons, the Russian superstar and the long-suffering Capitals are sitting on top of hockey for the very first time.

“It doesn’t matter what happened before,” Ovechkin said through his gap-toothed grin. “We just won it.”

The defeat ended the storybook inaugural season of the Golden Knights, who became the NHL’s 31st franchise last fall and immediately launched into arguably the greatest debut in modern pro sports history. Few expected the division title they delivered, and fewer still thought Vegas could challenge for a championship.

President Donald Trump congratulated the Capitals, giving the team a shout out on his Twitter feed, singling out player Alex Ovechkin as “a true Superstar” and saying that the city is “popping.” It’s the first Stanley Cup championship for the Capitals, which beat the Vegas Golden Knights in five games.

Congratulations to the Washington Capitals on their GREAT play and winning the Stanley Cup Championship. Alex Ovechkin, the team captain, was spectacular – a true Superstar! D.C. is popping, in many ways. What a time!

The Associated Press Contributed to this article.