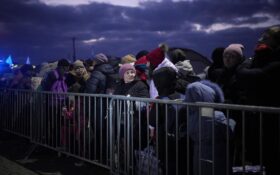 Warsaw’s mayor is appealing for international help as the city becomes overwhelmed by refugees, with more than a tenth of all those fleeing the war in Ukraine arriving in the Polish capital.

Some seek to wait out the war or settle in the city, while others merely use Warsaw as a transit point to head further west, turning its train stations into crowded hubs where people are camping out on floors.

“We are dealing with the greatest migration crisis in the history of Europe since World War II. … The situation is getting more and more difficult every day,” Mayor Rafal Trzaskowski said, adding that “the greatest challenge is still ahead of us.”

Vice President Kamala Harris praised the Polish people for their generosity for taking in nearly 1.5 million refugees since Russia invaded Ukraine last month. She also praised the refugees for their “courage” and said the conversation would help inform U.S. assistance efforts.

Harris met with Ukrainian refugees in Warsaw earlier this month — along with Polish President Andrzej Duda and Prime Minister Mateusz Morawiecki —  in hopes of getting a fuller picture of the unfolding humanitarian crisis.. Harris said most refugees who have fled Ukraine prefer to remain in Europe.

The welcome Warsaw has given Ukrainians as the neighboring nation struggles to resist Russia’s invasion is wholehearted. Across the city, people have mobilized to help. They are taking Ukrainians into their homes, gathering donations and volunteering at reception centers. City monuments and buses fly Ukraine’s blue-and-yellow flag in solidarity.

But the challenge is enormous. Much of the burden so far is being carried by volunteers taking time off work, a situation not sustainable in the long run.

Some refugees have been settling in one of Warsaw’s sports centers.

Trzaskowski noted on Friday that child psychologists, in one example, had been volunteering to help refugees but soon will need to return to their jobs.

Housing is also a growing problem. When the war began, 95% of Ukrainians arriving in Warsaw were people who already had friends or family here and were taken in by them. Today that group is 70% of the new arrivals meaning that 30% of them “need a roof over their heads” and other support, the mayor said Friday.

The decline in the city’s ability to absorb a massive number of new arrivals comes as the people fleeing war are those who have witnessed greater trauma than those who arrived earlier, or who are more vulnerable.

Late Thursday 15 disabled Ukrainian children arrived at the Medyka border crossing in Poland, and were put on a special makeshift medical train taking them to various hospitals in the country.

Dr. Dominik Daszuta, an anesthesiologist at Central Medical hospital MSWIA in Warsaw, described how the medical train was outfitted with intensive care capabilities. He spoke as medical staff lifted children in their strollers onto the train bound for Gdynia.

“At the beginning the people who came here were running away in panic from the war they saw in the media and that they heard about. Now we find there are people escaping from bombs,” said Dorota Zawadzka, a child psychologist volunteering at a center for refugees set up in the Torwar sports center.

“This is a completely different kind of refugee. They are afraid of everything. They sit in their jackets. Children are scared, they don’t want to play, their mothers have such empty eyes.”

Lena Nagirnyak, a 35-year-old from Kyiv, found shelter at Torwar with her children after initially hoping to stay in Ukraine. They finally fled on foot from Bucha to Irpin after hearing a bomber flying low overhead.

“The next day, the street we were walking on was bombed. If we had left a day later, we might have died,” she said.

Trzaskowski said over 320,000 people have traveled through Warsaw since the start of the war and 230,000 people were staying in the city of more than 1.7 million.

Other parts of the region are also under strain. Even the Czech Republic, which does not border Ukraine directly, has an estimated 200,000 refugees, many in Prague. As the capital runs out of housing options, city hall has begun preparing temporary accommodation.

“The demand for accommodation in Prague is enormous and by far surpasses what we can offer,” Prague Mayor Zdenek Hrib said.

Meanwhile, the national government appealed to Czech citizens to house refugees in their own homes, promising that it would find a way to compensate them.

Poland has already taken a similar step, with the parliament approving a law offering people 40 zlotys ($9.20) per day for each refugee they give shelter to. It’s part of a new legislative package that also offers some financial help and health insurance to the Ukrainians.

In Poland’s western neighbor, Germany, the influx so far has been concentrated on on the capital, Berlin, which is about an hour from the Polish border and the main destination for trains and buses from Poland.

Authorities there have been seeing over 10,000 people per day arrive. Officials are trying to spread new arrivals around the country, noting that they have better chances of getting somewhere to live and quick access to medical care elsewhere in Germany.

On Friday, Germany’s Interior Ministry tweeted in several languages that “rumors that arrival and registration is only possible in Berlin” are not true and that they can register and receive help in any city in Germany.