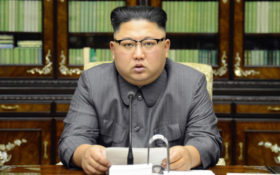 North Korea has tested nuclear weapons 15 times this year — but the Communist dictatorship may be getting ready to unleash its deadliest test ever in a matter of days.

For the first time in nearly 40 years, Communist officials could detonate a nuclear warhead in the air – and experts warn that could spread radiation across almost half of the globe, with dire health consequences for anyone caught in the path.

Kim Jong Un and Donald Trump have been ratcheting up their war of words since Kim resumed his country’s policy of nuclear blackmail. Kim has test fired 22 missiles since February and threatened to attack the mainland or U.S. territories like Guam.

President Trump threatened to “totally destroy” North Korea, if necessary, to protect the United States and its people.

Kim Jong Un called Trump a “mentally deranged U.S. dotard” and he would “definitely tame (him) with fire.”

Now his foreign minister has said exactly what the pint-sized dictator has in mind.

“It could be the most powerful detonation of an H-bomb in the Pacific,” Ri Yong-ho told South Korea’s Yonhap news agency on September 21.

The last atmospheric nuclear test was in 1980, when Red China detonated a nuclear warhead over its Lop Nur sea, which has since dried up. Since then, all nuclear tests have been underground, including all of the Kim dynasty’s tests since 1984.

But an above-ground nuclear test with today’s missile technology could be deadly, even if everything goes exactly as planned by Pyongyang.

The promised North Korean nuclear blast, and its fallout, potentially threaten the lives and health of millions of people. It could disrupt the electrical grid across whole nations. It could poison the environment. And it could trigger decades of “natural” disasters.

What effect would exploding one of today’s powerful nuclear warheads in the atmosphere have on human beings?

North Korea may aim to detonate the missile over the Pacific Ocean –home to millions of people living in clusters on islands and atolls, as well as fishers and sailors. Any human being in the vicinity of the blast site will likely die instantly.

North Korea might be so inept that it will kill people without even intending to. So far, North Korea shows little ability to control its missile’s path – four of its tests this year have been failures.

But nuclear experts say the health consequences of the blast will go on for days, weeks, or years after the blast itself – and be felt by people all over the globe.

The deadliest effects might not come from an explosion over a patch of water – but from nuclear fallout after the explosion.

Winds and air currents will carry nuclear fallout from the remote blast site to the four corners of the earth.

Lassina Zerbo, the executive secretary of the Comprehensive Nuclear Test Ban Treaty Organization (CNTBTO), ran a rudimentary test of what happens after the explosion.

If accurate, his map of devastating is absolutely chilling.

A nuclear cloud will waft from the ocean into Canada – and then the continental United States – in short order.

That cloud of radiation will hover over North America for two weeks after the detonation. Most of this will fall out of the sky as “black rain.”

The effect won’t be the same as being as the site of the explosion – but it could cause:

Loss of life won’t be the only problem.

An Electromagnetic Pulse (EMP) attack may be what North Korea had in mind all along.

Vipin Narang, an associate professor of political science at MIT, explained that if this nuclear test “doesn’t go exactly as planned and the detonation occurs at a lower altitude we could see some EMP-like effects for anything in the area.”

A strong enough attack could knock out vast sections of the U.S. electric grid, disrupt telecommunications, banking, air conditioning and heating, even vehicles.

“If it…doesn’t go exactly as planned….it could be a world changing event,” Narang said.

As long ago as 1962, U.S. tests knocked out satellite communications.

“Some fear electromagnetic pulses could bring down nearby planes” during the next blast, The Telegraph of London reported.

Narang warned that a nuclear test over the ocean will result in “a lot of dead fish, too.” The blast will baptize the Pacific Ocean in nuclear radiation, killing or mutating layers of aquatic life – plant and animals.

“Radioactivity is known to damage cells in humans, animals, and plants by causing changes in their genes,” a report at The Atlantic found. “The changes could lead to crippling mutations in future generations.”

The radiation could block the sunlight, blocking off photosynthesis and killing plants that depend on natural sun rays for life.

The death of plants will eliminate a source of food, causing the deaths of surviving sea creatures from starvation.

One of North Korea’s last nuclear tests, an underground test, caused a 6.3 magnitude earthquake in Yanji, China. Previous nuclear tests have triggered or added to “natural” disasters like landslides.

“We know from testing over decades that there are persistent environmental effects and impacts on humans,” said Melissa Hanham, a senior researcher also with the Center for Nonproliferation Studies.

The exact effects are a mystery – but an atmospheric nuclear test has the potential to harm every single form of life on this planet.

And if we know anything about the way Kim Jong-Un treats his people, it’s that he couldn’t care less about taking innocent human life.