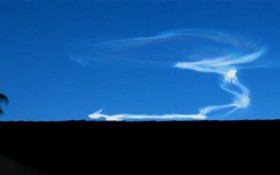 An early morning missile test in New Mexico could light up the sky for hundreds of miles, and authorities are ready for the flood of phone calls and emails that are likely to follow.

The unarmed Juno target missile will be launched between 6:30 and 7:30 a.m. MST from an old military depot in western New Mexico. The destination is White Sands Missile Range, some 215 miles away.

In 2012, a similar launch created a buzz when reports flooded in about a colorful contrail that was visible from southern Colorado west to Salt Lake City, Phoenix and Las Vegas.

This time, officials shared information about the launch in advance with communities as far away as Palm Springs, California. Radio stations in Arizona also were broadcasting stories about what people could expect to see in the pre-dawn sky.

“It’s hard to describe, but it’s very unusual, so that’s why we get the calls,” White Sands spokeswoman Cammy Montoya said. “People want to know: What happened? Is it a UFO? What’s going on?”

How spectacular the show will be depends on the conditions at the time of the launch. For example, the rising sun has to illuminate the twisting cloud-like formation in just the right way. The amount of crystallized water vapor in the atmosphere can affect color.

The contrail could last up to 45 minutes, but officials say that also depends on atmospheric conditions.

On its way to White Sands, the missile will drop a booster into a safety zone on private and national forest land north of Datil, New Mexico. Roadblocks have been set up in the area.

Since 1997, there have been 14 target missions from Fort Wingate to White Sands. The last one was in September 2012.