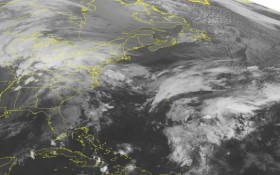 Forecasters are warning 63 million people in the central U.S. to have an eye out for bad weather this week as colliding air masses threaten to generate high winds and possibly tornadoes.

The threat Wednesday stretches from San Antonio to Chicago to Cincinnati. It appeared Monday that Missouri, southern Illinois and northern Arkansas would face the greatest severe weather threat, but the Storm Prediction Center cautioned that people throughout the Midwest should be prepared to take action should the forecast change.

“It’s going to be a large area, depending on how much unstable air develops,” said Bill Bunting, the operations chief at the Norman, Oklahoma-based forecasting center. He said that while the jet stream and upper-level disturbances were aligning in the atmosphere to aid storm development, another key ingredient — moist Gulf air flooding into the Midwest — was the great unknown.

“It’s not a given. We have concerns about the amount of low-level moisture that will be in place. That’s a common challenge in November forecasting,” Bunting said.

A series of cold fronts have pushed humid air well south, but should it return Tuesday and Wednesday the result could be very bad weather.

While seeking out forecasts was advisable, there’s another way for non-scientists to know if something is up: “Wednesday morning, if there are low clouds streaming northward rapidly, Wednesday will be a day you can expect severe thunderstorm and tornado watches,” Bunting said. “If less moisture is in place, you may have showers and a narrow squall line. Nothing is off the table.”

November storms aren’t unusual; Illinois had eight deaths in tornadoes in November 2013. So far this year, there have been 10 deaths from tornadoes, but none since May. Seven occurred in mobile homes.

Since the May 2013 tornado at Moore, Oklahoma, killed 24 people, including seven school children, the nation’s has had 77 deaths from tornadoes. The worst was a storm that killed 16 west and north of Little Rock in April 2014.