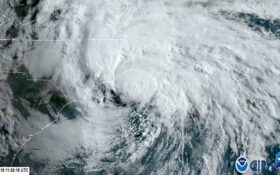 The storm could produce between 1 and 3 inches (3 to 8 centimeters) of rain with higher amounts in some coastal areas.

In Savannah, Georgia, Tuesday night’s Savannah Bananas home baseball game remains scheduled. Officials for the collegiate summer league team planned to cover the field with a tarp on Monday in preparation for the game.

“For us, being on the coast and being in Savannah, we get some nasty pop-up storms that can dump an inch of rain in just a few hours,” Bananas President Jared Orton said Monday.

“I think we’re good to go as long as the sun comes out tomorrow and it should be a beautiful night in Savannah, I would think.”

A U.S. Air Force Reserve aircraft is scheduled to investigate the system Monday evening to give forecasters more data.