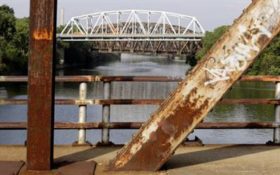 President Donald Trump vowed to unveil a plan to improve America’s infrastructure within the first 100 days of his presidency, and a new report proves that plan is necessary now more than ever.

The report says the Brooklyn Bridge and Washington’s Arlington Memorial Bridge are among thousands of spans considered structurally deficient.

Although the numbers of deficient bridges have declined in recent years, the American Road & Transportation Builders Association’s analysis of transportation department data shows more than 55,000 bridges in the U.S. have been deemed deficient.

Bridges labeled structurally deficient aren’t necessarily in immediate danger of collapse. The term is applied when spans need rehabilitation or replacement because at least one major component has advanced deterioration or other problems.