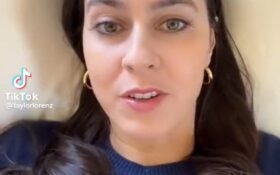 One columnist for The Washington Post just poured gasoline on hot garbage… and brought matches.

Technology reporter Taylor Lorenz published a column about @Libs of Tik Tok, a Twitter account known for adding captions to short videos of liberals embarrassing themselves. In the column, Lorenz publicized the Twitter user’s real name just weeks after complaining that such an act was evil.

Last month, Lorenz commented on the story of “West Elm Caleb,” a furniture designer insulted by a disgruntled ex-lover on TikTok.

Lorenz took issue with the reporters using West Elm Caleb’s real name without any comment from him.

She said in the video:

I’m not going to lie. I’ve been pretty horrified by a lot of the media coverage of this. A lot of people are just aggregating some of the cruelest commentary online and whipping it all up into a news story with absolutely no comment from Caleb or nuance about the situation.

The top story on Google yesterday… doxxes Caleb, puts his full name in the story. Zero comment from this man!…

“Doxxing” involves publishing a person’s identifying information online in order to cause harm. The practice may fall under state and federal anti-stalking laws.

Take a look at Lorenz’s video —

In a recent TikTok, Taylor Lorenz explains why it’s bad to engage in a doxxing campaign of an individual and shares her horror at media revealing a full name without getting comment. Incredible pic.twitter.com/ad19fY0dJh

Then on Tuesday, Lorenz published her column about @LibsOfTikTok. She used the account creator’s real name without any comment from this person.

Stop us if that sounds familiar.

It remains unclear whether Lorenz even reached out for comment. The column doesn’t mention reaching out to the creator, and @LibsOfTikTok has yet to tweet about any personal interaction with Lorenz.

Lorenz also told MSNBC in early April that online harassment had caused her “severe PTSD” and, while crying, said that she had contemplated suicide. MSNBC took down the video of the interview after criticism surfaced.

Obviously, Lorenz shouldn’t be stalked. She should just live up to her own standards.