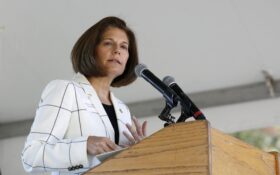 Democrats have always tried to portray themselves as the party of “the people,” but modern Democrats can’t get away from the average American fast enough. Now, yet another high-powered liberal has been caught using COVID-19 as an excuse to dodge meetings with voters… while still partying it up with rich insiders behind doors.

The hypocrisy couldn’t be starker—and it couldn’t have hit a more vulnerable Democrat.

U.S. Sen. Catherine Cortez Masto, D-Nev., kept all of her Senate offices closed to the public through the month of March, supposedly to fight COVID-19.

Reporters heard that Cortez Masto had been trying to limit the ways people can reach her, so they showed up at her offices. They say the Democratic senator’s offices in Washington, D.C., Las Vegas, and Reno were all closed through last month—no admittance to normal people.

The Las Vegas office says it “is open by appointment only.” A similar sign hangs outside her Reno offices, where her Republican challenger — Adam Laxalt — documented her closed-door policy.

“We also stopped by #NoShowMasto’s Senate office in Reno,” Laxalt wrote. “Her doors were shut to the public there as well and Nevadans are only able to reach her office ‘by appointment only.’”

We also stopped by #NoShowMasto’s Senate office in Reno.

Her doors were shut to the public there as well and Nevadans are only able to reach her office “by appointment only” pic.twitter.com/gmsrqjmNe3

The Washington Free Beacon found that, even if Nevadans traveled all the way to Washington, D.C., there was still no room for them to meet “their representative” in Washington. The investigative website snapped a photo showing her solid glass doors bolted shut—tight—with a massive iron bar and a sign telling the janitorial staff, “Cleaning not required.”

Just one week earlier, Joe Biden told every member of Congress—including the Nevada Democrat—it was time to get back into the office during his State of the Union Address. “People working from home can feel safe to begin to return to the office,” Biden said.

But that’s just for little people.

So is the senator’s closed door. If you’re rich, you can see her in person at your request.

Even while the Democrat kept her own voters out in the cold, Sen. Cortez Masto showed up at the American Council on Renewable Energy’s 20th-anniversary gala to accept a special award.

On Mar. 23, Sen. Cortez Masto received the group’s “renewable energy champion award”—live and in the flesh—and even let the group brag about it in public.

The environmentalist group posted a picture of the COVID cautious senator grabbing the award from the hand of the group award presenter, pressing the flesh with him, and posing for a photo op.

There is absolutely no social distancing in the picture, as flashing electronic banners on either side of the smiling elitists say, “Congratulations To Our Renewable Energy Champion Winner Sen. Catherine

So, she’s keeping average voters from weighing in on their concerns with their senator in the name of COVID — even as the number of COVID infections in March hit its lowest level since last summer.

But when Green activists offer her an award, and maybe a chance to collect some Big Green of her own, she’s ready to huddle cheek-to-cheek with them.

What’s going on? It’s not just hypocrisy — although Democratic politicians have shown that time and again, from California Gov. Gavin Newsom, to House Speaker Nancy Pelosi, to Chicago Mayor Lori Lightfoot. Most recently, Vice President Kamala Harris walked around with no mask while schoolchildren were forced to mask up so they didn’t infect Her Highness.

This particular case is because Cortez Masto needs connections — and cash — because she’s in the electoral fight of her life.

Sen. Catherine Cortez Masto is a first-term Democrat running for reelection in Nevada, a state that usually goes Democrat. But she’s running while Biden and Harris are running the country… and the people are angry as Hell!

First-term senators are the most vulnerable members of the Senate; once they’ve been reelected, they tend to stick around Congress forever. She’s at high risk for that alone.

To make matters worse, Cortez Masto has voted with Joe Biden 95.5 percent of the time. If you like Biden’s policies, you can thank Cortez Masto.

She’s so desperate, she’s socking away $10 million in ad buys for the last stretch of the election, from Labor Day to Election Day 2022.

That’s four times as much as all her possible Republican competitors combined.

The major ad buy shows Cortez Masto is scared. Outside groups are hitting her with her Hispanic base.

“Far too many Democrats in Washington are out of step with the priorities of Hispanic voters. This includes…Cortez Masto,” who “recently worked to pass the most extreme abortion law ever voted on in the U.S. Senate,” CatholicVote President Brian Burch told Fox News. “Our campaign is the beginning of a focused effort to educate and persuade Hispanic voters, many of whom are Catholic and pro-life, to push back against the growing extremism inside the Democratic Party.”

Cortez Masto can’t blame anyone but herself. After all, she might have known Hispanics don’t love abortion…if she’d ever let them in her offices.