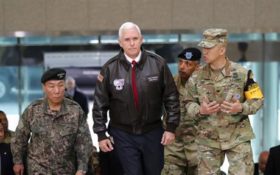 Vice President Mike Pence is launching a “Latinos for Trump” coalition in Miami — and he’s doing so right as Democrats are trying to grab the national spotlight.

It’s an effort by the Trump campaign to engage Latino voters in advance of the 2020 election, coming a week after President Donald Trump officially kicked off his campaign in Orlando.

The political move will also be a finger in the eye of the Democratic presidential primary debates, which are being held in Miami on Wednesday and Thursdays nights.

The Trump administration’s involvement during the time of the Democratic debates is likely to steal the show from a group of hopefuls who’re already reeling and infighting.

Pence seems ahead of the curve, predicting that the Democrats will, “advocate more taxes, more regulations, something called ‘Medicare for All’ and the Green New Deal,” according to MSNBC.

This signals a recognition from the Trump administration Florida’s significance for the president’s reelection hopes.

The state is home to more than 2 million registered Latino voters, and the Trump campaign believes they have an opening with them because of the president’s economic policies, which they say have contributed to low unemployment rates among Latinos, among other issues.

29 Electoral College votes are at stake, and not only has the Trump administration began to prioritize The Sunshine State, the Republican National Committee, led by Chairwoman Ronna McDaniel, will lead the effort to counter the Democrats during the debates in real time.

“This week, the crowded field of Democrat candidates will use the debate stage to paint a glamorous view of their socialist proposals,” McDaniel said in a statement to NBC News. “With the advantage of a fully equipped war room and rapid response team, our job is to fact-check Democrats’ bogus statements and expose the truth behind their radical agenda.”

Republicans see an opportunity particularly in South Florida, where the sizable Cuban population tends to lean conservative — and understandably so.

Many escaped the brutal regime of Fidel Castro, looking for a better life.