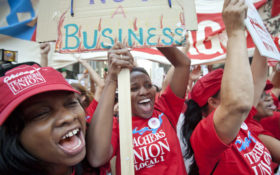 Take one more color out of the “rainbow” coalition of the left – because rank-and-file union workers have abandoned the Democratic Party.

They’ve been left in the dust by the liberal leadership, which cares more about overseas workers than hard-up Americans struggling to get by in the heartland.

And this loss of this critical voting bloc could mean the death of the Democratic Party as we know it.

The desperate left should be trying to play catch up – begging union workers to come back.

Instead, they’re TURNING on them!

Lefty magazine The New Republic just called out the trade unions that focus on building and construction.

Once a reliable Democratic bloc, those unions are now solidly on Team Trump because of the new president’s infrastructure plans, which will lead to a wave of construction, building and rebuilding across the country.

The left should be coming up with their own plans to put these workers back on the job.

Instead, The New Republic is cooking up insults!

“Only a progressive labor movement that sees workers as part of a larger social movement for justice and equality can represent the interests of all working-class Americans, regardless of race, gender, sexual orientation, or immigration status,” the magazine’s Erik Loomis wrote. “The building trades have too often been the enemy of these goals. And by supporting Trump’s actions, they have done so again.”

It’s full of left-wing talking points, right down to sexual orientation and immigration status… but it fails to mention the ONE THING workers really want: WORK!

No wonder they’re turning to Trump, and the leaders of many of those groups say the new president is already doing something rare for a politician.

“He intends to do the work on the issues he discussed on the campaign trail,” Sean McGarvey, president of North America’s Building Trades Unions, said after a meeting with Trump, according to The Washington Times. “It was by far the best meeting I’ve had [in Washington].”

Of course it was; Trump is well aware of the secret to his success… and it starts with union workers across the rust belt. In Michigan, for example, Obama won the union vote over Mitt Romney by 33 points, according to The Washington Post.

And overall, union households voted for Clinton by a 9-point margin… down from the usual 20 percent edge Democratic presidential candidates have generally enjoyed.

Keeping those voters will be essential to Trump’s future ambitions, including his hopes for reelection in 2020, which is why jobs and infrastructure will play a key role early in his administration.

So while some union leaders will no doubt keep pushing leftist politics, the actual members will be doing something else for a change.