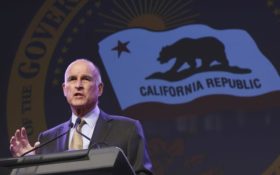 There’s an effort to split California into three new states that’s gaining steam — and it may be heading to the ballot box in the 2018 midterm election.

It’s a question that could forever reshape America, and it’s already well on it’s way to the voting booth.

California Secretary of State Alex Padilla announced Thursday that Draper is allowed to take the next step and circulate a petition among California residents. If he’s able to obtain 365,880 signatures from registered voters within the next 180 days, the state of California will officially vote to split apart after the 2018 election.

Should the measure gains enough signatures and voters choose to divide up the Golden State, California state’s assets and debts would be divided evenly among the three new entities.

According to a local Bay Area NBC News affiliate in California, the state would be divided accordingly:

The idea of the vote making it to the ballot isn’t too far fetched, either. After all, Californians once voted to allow a police officer in San Francisco walk his beat with his ventriloquist dummy. They tried to ban hippies from sitting on sidewalks (but failed).

California even voted once to ban the sale of horse meat to Europe on a statewide ballot.

Is it so much of a stretch to think that a billionaire could find over 365,000 people who want to divide the state into three?

If the initiative passes, it would mean the new state(s) map would look like the following:

Bitcoin billionaire investor wants to split California into 3 different states. Here's what it would look like: https://t.co/KHpeJKQdia pic.twitter.com/yMm8eUaHEc

What do you think of the idea?

Should California be split into three new states?