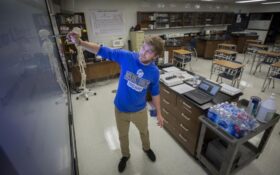 A few weeks into the new school year, growing numbers of U.S. districts have halted in-person learning or switched to hybrid models because of rapidly mounting coronavirus infections.

More than 80 school districts or charter networks have closed or delayed in-person classes for at least one entire school in more than a dozen states. Others have sent home whole grade levels or asked half their students to stay home on hybrid schedules.

The setbacks in mostly small, rural districts that were among the first to return dampen hopes for a sustained, widespread return to classrooms after two years of schooling disrupted by the pandemic.

In Georgia, where in-person classes are on hold in more than 20 districts that started the school year without mask requirements, some superintendents say the virus appeared to be spreading in schools before they sent students home.

“We just couldn’t manage it with that much staff out, having to cover classes and the spread so rapid,” said Eddie Morris, superintendent of the 1,050-student Johnson County district in Georgia. With 40% of students in quarantine or isolation, the district shifted last week to online instruction until Sept. 13.

Before the latest virus resurgence, hopes were high that schools nationwide could approach normalcy, moving beyond the stops and starts of remote learning that interfered with some parents’ jobs and impaired many students’ academic performance.

Most epidemiologists say they still believe that in-person school can be conducted safely, and that it’s important considering the academic, social and emotional damage to students since the pandemic slammed into American schools in March 2020.

In some cases, experts say, the reversals reflect a careless approach among districts that acted as if the pandemic were basically over.

“People should realize it’s not over. It’s a real problem, a real public health issue,” said Dr. Tina Tan, a Northwestern University medical professor who chairs the American Academy of Pediatrics Section on Infectious Diseases. “You have to do everything to prevent the spread of COVID in the school.”

Tan and others say that means not just masks in schools but a push for vaccination, social distancing, ventilation and other precautions, providing multiple layers of protection.

Dairean Dowling-Aguirre’s 8-year-old son was less than two weeks into the school year when he and other third graders were sent home last week in Cottonwood, Arizona.

The boy took classes online last year and was overjoyed when his parents said he could attend school in-person. But Dowling-Aguirre said she grew more anxious as infections climbed. Masks were optional in her son’s class, and she said fewer than 20% of students were wearing them.

Then she got a call from the principal saying her son had been exposed and had to stay home at least a week. Of particular concern was that her parents watch her son after school and her mother has multiple sclerosis.

“It’s definitely a big worry about how it’s going to go from here on in and how the school’s going to handle it,” she said.

In Georgia, more than 60,000 students — over 3% of the state’s 1.7 million in public schools — are affected by shutdowns so far. Many superintendents said they have already recorded more cases and quarantines than during all of last year, when most rural districts held in-person classes for most students.

“This year, you saw it very quickly,” said Jim Thompson, superintendent in Screven County, Georgia. “Kids in the same classroom, you’d have two or three in that classroom.”

Thompson said the county’s 25-bed hospital warned it was being overloaded by infections but what led him to send the district’s 2,150 students home was concern that he wouldn’t be able to staff classes.

“You don’t want to start the school day and find you don’t have enough teachers,” Thompson said.

The onslaught is driving changes in mask policies. Weeks before school started, only a handful of large districts covering fewer than a quarter of students across Georgia were requiring face coverings. Now, mask mandates cover more than half of students.

Part of the mask policy change is driven by a shift in U.S. Centers for Disease Control and Prevention guidance. The CDC now advises that when everyone is wearing masks, exposed students 3 feet (1 meter) or more apart don’t have to be sent home if they’re not showing symptoms.

Angela Williams, the superintendent in Burke County, Georgia, said she believes masks and that rule will allow her 4,200-student district near Augusta to avoid further disruptions after its current two-week shutdown.

“That is going to cut down on the number of students we’re having to quarantine,” Williams said.

Georgia told districts in early August that they could choose their own quarantine policy, and some loosened rules.

Thompson, though, said Screven is likely to retighten its policy when it returns and require everyone who is exposed to quarantine for at least a week because of delta’s high contagion level.

“We started with utilizing that latitude to its fullest,” Thompson said. “That did not work for us locally.”

Some districts are also looking to boost vaccination rates among staff and eligible students, but most Southern schools appear unlikely to mandate teacher vaccination or testing, unlike states on the West Coast and in the Northeast. Thompson said he sought to schedule a vaccine clinic in Screven County last week but got so few takers it was canceled.

Despite disruptions, there’s still strong resistance to masks. In the 28,000-student Columbia County in suburban Augusta, officials said they were putting plexiglass dividers back up in school cafeterias, as well as limiting field trips, school assemblies and classroom group work. But the district continues to only “strongly recommend” masks.

Even some districts that have sent all their students home don’t expect to require masks when they return, facing opposition from parents and the school board.

“They wanted that that should be the parents’ decision,” Morris said of school board members.