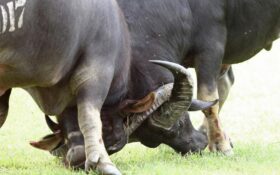 After more than 250 days on the run, an 800- to 900-pound (360- to 410-kilogram) beefalo that has been roaming the woods in western Connecticut since it escaped on its way to a slaughterhouse has been captured, police said.

The beefalo — a cross between a bison and domestic cattle — eluded its handlers on Aug. 3, while being loaded off a truck at a meat processing business in Plymouth.

Nicknamed “Buddy,” his adventures, including appearances on a wildlife camera set up by police and failed attempts to lure him into a pen with food, gained widespread attention and inspired the creation of several social media accounts in his name.

Plymouth police announced his apprehension on Wednesday, posting the animal’s picture on social media with the word “Captured” stamped across it in red letters. A second photo shows Buddy in a pen.

Buddy had wandered onto a farm in town and was hanging out with some cows when the farm owner snagged him and eventually got him into a trailer, Plymouth police Capt. Edward Benecchi told The Hartford Courant.

“His capture was the result of a community effort from spotting him, feeding him throughout the winter and to the experts who were able to make the final capture,” police said in the post. “We would like to thank all those would brought this adventure to a successful resolution.”

Authorities decided early on in their search not to seek the death penalty for Buddy and have raised money for his continued care.

Police said the beefalo will be heading to Massachusetts for a veterinary exam and will then be sent to the Critter Critter Creek Farm Sanctuary in Gainesville, Florida.

“Without everyone’s donations this would not be possible,” police said. “Thank you for all your continued support and we wish Buddy safe travels and happy life.”