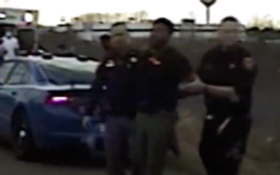 Last week The Horn News reported about the shocking arrest of a Michigan Democrat cited in a DUI incident.

Now, the arrest video has been captured on film.

And the video quickly went viral.

Michigan State Rep. Jewell Jones was put in handcuffs early April after police responded to calls about a truck driven into a ditch along a major interstate.

According to the police report cited by news outlets, not only had Jones had a blood-alcohol content of more than twice the legal limit — he was also unruly when faced with arrest.

Pepper spray and a taser were used to get Jones under control, and a gun was even found in his vehicle.

But perhaps that’s not the worst of it.

During the arrest, he threatened state troopers…

He said he’d call his Democratic pal Gov. Gretchen Whitmer if the troopers tried to arrest him. Jones oversees the state police budget.

“I run y’alls budget, bro,” he allegedly said.  He also asked for badge numbers and said he would report the officers directly to Whitmer.

Now the state lawmaker is facing serious charges, including driving with high blood-alcohol content, reckless driving, and possessing a weapon while under the influence, according to The Associated Press.

The dashcam footage shows officers racing to the scene where Jones had been allegedly causing a disturbance.

You can watch the footage below:

Jones’ attorney Ali Hammoud blasted the state troopers for the incident, insinuating that unnecessary and excessive force was used.

“The officers decided to throw Representative Jones to the ground and three of them held him down,” Hammoud said, “crushing him under their weight. The officers also tased Representative Jones in his head, causing memory loss and leaving scars that are visible to this day. They used so much pepper spray on his face that his eyes still appear profoundly red and swollen.”