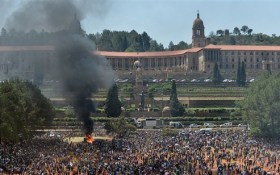 President Jacob Zuma met with student leaders and university managers and his office later announced that there would be no fee increase for university students in 2016, a significant concession to their demands.One of the biggest student movements to have emerged since South Africa rejected white minority rule in 1994 poses a challenge to the ruling African National Congress party.

The announcement did not satisfy many student protesters.

“We should be having free education,” said 18-year-old Bongani Shabangu, who is studying education at a Pretoria university. “Most of us are from poor families.”

Troy Mathebula, a student leader who attended the meeting with Zuma, said students were promised a freeze on tuition hikes next year. But Mathebula said student demands for free education were not met.

“We’re not happy about it,” Mathebula said.

Security forces periodically detonated stun grenades to clear students who were trying to force an opening in the fence and throwing stones at police officers. Some knocked over portable toilets and set them alight.

Most of the protesters were not involved in the clashes.

The students, some chanting and singing, had gathered in throngs on a large lawn at the foot of the Union Buildings in the capital, Pretoria, capping more than a week of protests against tuition increases planned for next year. A large statue of the late anti-apartheid icon and former President Nelson Mandela with a wide smile and arms outstretched overlooked the mayhem, which spilled into surrounding streets as armored police vehicles careened toward stone-throwing demonstrators.

Many students accuse the government of not doing enough to support university students and their families who are struggling to pay bills.

Students had expected Zuma to address the protesters outside the Union Buildings on Friday and after it became apparent he would not come, protesters threw stones at police who responded with stun grenades and tear gas.

Zuma and other leaders of the ruling party have said they are sympathetic to student concerns and welcome their protests, as long as they are peaceful.

A police helicopter flew overhead as some students pushed and pulled on a fence preventing them from getting closer to the government offices.

“Stop corruption, fund students,” read one student placard. Another said: “Dear Mr. President: How do you sleep while the rest of us cry?”

Costs vary, but annual tuition for undergraduate students in South Africa runs to several thousand dollars at some universities. That amount, combined with textbook and accommodation costs, is a burden for many poor students in a country with a wide gulf between the affluent and those with limited means.

The protests began last week at the University of the Witwatersrand in Johannesburg, which later dropped plans for a 10.5 percent tuition hike in 2016 and has suspended classes until at least next week because of the disruption.

Many universities are in exam season, and there have been reports of protesters going into lecture halls and forcing some students to stop taking exams. On Wednesday, a student protest outside parliament in Cape Town turned violent and 30 demonstrators were arrested.