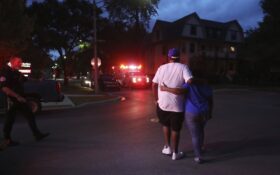 Fourteen people, including five children, were killed as more than 100 people were shot in a wave of gunfire in Chicago over the Father’s Day weekend that produced the city’s highest number of shooting victims in a single weekend this year.

Among the victims was 3-year-old Mekhi James, who police said was fatally shot Saturday as the boy was in a car with his father in the south Austin neighborhood.

Police said the child’s 27-year-old father was the intended target when someone fired shots at the vehicle, but he is not cooperating with detectives. Community leaders are offering a $10,000 reward for any information in the boy’s killing.

After Mekhi’s fatal shooting, longtime community activist Andrew Holmes said he had spoken to one of the boy’s relatives, who said the child’s mother is “totally upset,” the Chicago Tribune reported.

“She loved her baby,” Holmes said, adding, “This baby had a family.”

The weekend’s other young shooting victims included a 13-year-old girl who died after being shot in the neck while watching TV in her home, and two boys, ages 17 and 16, killed in a separate shooting on Saturday.

Police Superintendent David Brown said police were working hard to track down those responsible for the violence in several Chicago communities. He said “gangs, guns and drugs” are the common thread in those shootings.

“Good men throughout this city should be celebrating with their families on a beautiful day, but instead, a number of Chicagoans will be spending Father’s Day grieving the loss of their children,” he said Sunday.

In all, 102 people were shot across Chicago from Friday evening to Monday morning — the highest number of shooting victims in a single weekend this year, the Chicago Sun-Timesreported.

The violence comes nearly a month after Chicago had its deadliest Memorial Day weekend since 2015 as nine people were killed and another 27 wounded in shootings.