Violence in Portland - Police attacked with mortar - The Horn News 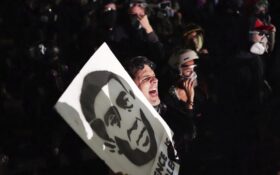 Protesters outside a Portland police union building set fires and used a mortar to launch commercial grade fireworks at police and officials said Monday that two officers were injured and 16 demonstrators were arrested.

A day after demonstrators managed to get inside the union building and set a fire, the protesters on Sunday night blocked a road and set dumpster fires outside it, police said in a statement.

The fireworks were launched at police as they tried to clear out the demonstrators and one of the two officers treated at the scene suffered a burn on her neck.

The demonstrators who were arrested face misdemeanor charges of disorderly conduct or interfering with a peace officer. Their detentions came after nine protesters were arrested Saturday night and 24 Friday night.

Sunday night’s demonstration came after demonstrators marched to the building from a nearby park. As police moved to break up the gathering, the commercial-grade fireworks were thrown at officers, police said.

The department released photos of the officers’ injuries, including a photo of a face covering that the statement described as being “partially melted” from the fireworks.

The protests in Portland have happened nightly for 70 days since George Floyd was killed in Minneapolis.

The violence reached an apex when protesters targeted a federal courthouse last month that was defended by federal agents who lobbed tear gas at the attacking demonstrators in two straight weeks of nightly confrontations.

The federal agents withdrew more than a week ago amid hopes for calm, but the violent protests have resurfaced miles from the courthouse.

Three officers were injured in a protest Saturday night, including two who were treated at a hospital and released. And on Friday night, demonstrators defied orders to disperse and hurled rocks, frozen or hard-boiled eggs and commercial-grade fireworks at officers.

Some filled pool noodles with nails and put them on the road, causing extensive damage to a patrol vehicle, police said.

The police union building for the Portland Police Association is about 5 miles north of the federal courthouse.

Breaking: Portland Police declared a riot. #Antifa broke inside the union hall and set the inside on fire. This is the third time they’ve broken into the police union and the second time they set fire inside. #PortlandRiots pic.twitter.com/wC2gKhzLcL