Violence against Trump supporters sweeping the nation - The Horn News 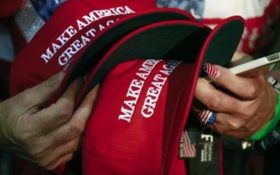 A concerning wave of violence has spread throughout the country — and overwhelmingly, the victims all have one thing in common.

Mainstream outlets like CNN and NBC have been completely silent about the level of anger directed not just at Trump, but the growing number of physical attacks on everyday Americans. In fact, three people were attacked just this week.

The media’s message is loud and clear: If you support the president, you should be afraid.

A New Jersey man was reportedly was confronted over his MAGA hat while shopping for groceries. The 81-year-old was then assaulted. He was hospitalized for minor injuries.

All that over his hat.

Of course, it doesn’t end here. Some of the violence against Trump supporters even go as far as hate crimes.

Rosiane Santos, a 41-year-old, assaulted a 23-year-old Bryton Turner in Falmouth, Mass. The two happened to be dining in the same Mexican restaurant when Santos allegedly attacked him.

“She just grabbed my hat and started throwing it and I was trying to hang onto it,” Turner said. “I was just in shock that somebody would act this way.”

Santos was accused of pulling Turner’s hat over his head, even suggesting that the bartender should poison his drink. Despite the harassment, Turner insisted he would keep wearing his hat.

“I am absolutely going to keep wearing it because if I stop wearing it these people win. There is an attack on free speech these days, especially the MAGA hat.”

And in the end, the case was resolved, with Santos being arrested and then detained by Immigration Customs Enforcement (ICE). Authorities say Santos is a Brazilian citizen that is in the United States illegally.

Sadly, the hatred is even spilling into the schools.

Video was captured Tuesday of a young man decorated in the American colors, complete with a MAGA hat and Trump flag, being bullied by a fellow student.

A Trump supporting student at Edmond Santa Fe High School had his MAGA flag ripped off of him by another student.

These malicious attacks must be dealt with.

The altercation took place at Sante Fe High School in Sante Fe, Oklahoma, as reported by The Daily Caller.