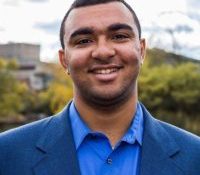 A young man attending a prayer vigil in Charlottesville — a black man who belongs to the Young Americans Foundation, a conservative youth group — claims he was physically attacked by a mob of white liberal thugs this weekend.

Caleb Slater says he was at a service memorializing the innocent 32-year-old woman that was killed when a car drove into a crowd of protesters. When members of the alt-left saw him wearing a Young Americans Foundation hat, they quickly moved in.

What followed was disturbing.

Slater explained to Legal Insurrection that the reason he wore the hat was “to show that conservatives condemn the actions of the alt-right just as much as anyone else in our culture.”

This brave display was ignored as violent alt-left “Antifa” members and other liberals harassed him with shouts and jeers, which he caught on camera in a short video clip.

In the video, the protesters can be heard shouting “You’re not welcome here! Get out!” despite Slater’s insistence that he’s acting peacefully and minding his own business.

“One of the girls from Antifa, dressed in all black, began to shout me down and ask, ‘Are you with right wing media? Why do you have the fu**ing hat on? You’re with Young America’s Foundation?’” Slater reports. “I simply responded by informing them that I meant no harm and was peacefully assembling.”

The alt-left thugs became even more aggressive, yelling “We don’t want you here!” Slater claims. He says a mob began grabbing and pulling on his camera to prevent him from filming, and during the scuffle someone began choking him.

Of course, there’s no outrage from the mainstream media after a mob of white youths attacks and chokes a young black man at a prayer vigil for a victim of hate — but only because he was a conservative.

Imagine what the media would say if it had been a black liberal attacked by a group of white conservatives at a prayer vigil?

The media firestorm would call for their heads!

The confrontation escalated when someone in the alt-left mob took his hat off his head and threw it on the ground, Slater said, before grabbing him by the shirt and pushing him into the busy street.

“This was NOT a blocked off road and cars were present. I could have gotten run over and they did not care,” Slater emphasizes.

And they expect us to think they are the tolerant left?

But no one is reporting on this assault of a young teen trying to speak out against the injustices committed by crazy neo-Nazis.

It’s further proof that liberals don’t care to distinguish between honest conservatives who are fighting for justice and the violent criminals who preach hate.

Caleb Slater is the president of College Republicans at Ithaca College.