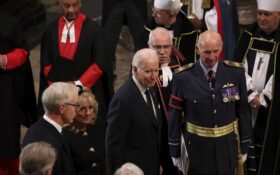 The president and the first lady suffered one embarrassment after another.

First off, the couple appeared to be arriving late. They arrived at 10:05, according to the Guardian, but Buckingham Palace had encouraged all the invitees to arrive between 9:35 and 9:55.

Instead of taking the provided shuttle, the Biden family arrived at the funeral in a more secure limousine known as “the Beast,” complete with heavy artillery.

From the limousine, Biden was met with some profane chants, according to a viral video.

The British started a #FJB chant when Biden showed up to the Queen's funeral LMAOOOOOpic.twitter.com/P9ezjDDUTd

It remains unclear whether or not the video has been edited.

Still, Biden caused himself plenty of other embarrassments.

Once arriving late at the funeral, the Biden family waited awkwardly for several minutes near the entrance, so as to avoid interrupting the meticulously planned procession.

“He may be the world’s most powerful man but the apparent late arrival of the US president, Joe Biden, and his wife, Jill, was not allowed to disrupt the finely tuned choreography of the late Queen’s funeral,” a reporter for the Guardian wrote Monday.

Observers worldwide were speculating about the reason for Biden’s place in the nosebleed seats.

The Guardian attributed this arrangement to Biden’s tardiness and his decision to take a limousine… but former U.S. President Donald Trump had a different idea.

Trump interpreted Biden’s faraway seat as a sign of disrespect from Buckingham Palace.

“If I were president, they wouldn’t have sat me back there—and our Country would be much different than it is right now,” Trump wrote Monday on Truth Social.

“This is what’s happened to America in just two short years. No respect! However, a good time for our President to get to know the leaders of certain Third World countries.”

Since leaving the White House, Trump has spoken about restoring international respect for the U.S.

“When China looks,” Trump said on Fox News last year. “They laugh at us.”

Only current presidents attended the funeral. Former presidents, like Trump and Barack Obama, were not invited due to lack of space.

However, both Trump and Obama were invited to a memorial service in Washington, D.C., Time magazine reported Monday.

Take a look at some footage from the funeral —

President Biden is seen arriving at Westminster Abbey about an hour before Queen Elizabeth II’s funeral is set to begin. Biden is the only head of state allowed to bring his own vehicle, Norah O'Donnell reports, as all other presidents and dignitaries will arrive by bus. pic.twitter.com/jIF1g4ELZl

I think Erdogan this time made a good choice by not attending Queen Elizabeth’s funeral.

All the other head of states were carried to Westminster Abbey in coaches.

But Biden came with his own armoured private car.

Humiliating for everybody else pic.twitter.com/tIfHXA8zNv