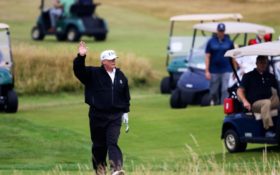 Former President Donald Trump teed off at the controversial LIV Golf… and then took a swing at President Joe Biden.

Biden has become known for not only his verbal gaffes, but also his physical gaffes. In June, Biden fell off a stopped bicycle while vacationing in Delaware, rewewing fears about his capacity for the job.

"Do you think Biden could do that? I don't think so" #LIVGolfMiami pic.twitter.com/MWPXHz4xZT

Biden fell off his bike while stationary this morning pic.twitter.com/ZNh1wHlGI6

LIV Golf Miami Team Championship is the final event of the inaugural LIV Golf season and is only for 12 four-man teams, with each winning team member getting $4 million. This will be the first big event at Trump Doral since a World Golf Championship in 2016.

The LIV Golf series, established as the PGA tour’s rival, has attracted controversy due to its ownership by the Saudi Public Investment Fund.

Critics have accused LIV Golf of ignoring Saudi Arabia’s record on human rights during a fraught time for the U.S.-Saudi partnership over energy.

As of July, the PGA has been considering lifetime bans for any members leaving to join LIV Golf, sources told Front Office Sports.

June Flashback! Fox News star unloads on Biden for falling off a bike