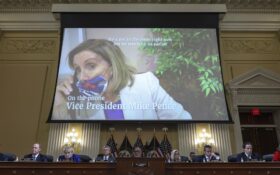 Pelosi promised to “punch him out” according to a leaked video from last year… and Trump just responded by exposing a double standard in the liberal media.

During last year’s Capitol riot, a staffer told Pelosi, “The Secret Service said they have dissuaded him from coming to Capitol Hill. They told him they don’t have the resources to protect him here. So at the moment, he’s not coming, but that could change.”

CNN obtained the video earlier this month from the House speaker’s daughter, a filmmaker known for her documentaries on HBO. The cable news network shares a parent company with HBO.

Pelosi gave an interview Tuesday with MSNBC… and sh downplayed her remark about punching Trump.

MSNBC host Andrea Mitchell asked Pelosi, “Would you have done it?”

Pelosi dismissed the premise of the question. “He wouldn’t have had the courage to come to the Hill; it’s all talk,” the House speaker said.

Trump had some different ideas.

In a viral clip, Trump took issue with Pelosi’s remark… and with the liberal media cheering her on.

“Well, she’s a despicable person, very bad for the country. If I ever said that, it would be a national scandal,” Trump said. “Think of it. If she makes a statement like that, it’s totally fine. If I make a statement!”

“What about Biden saying ‘take him to the back of the barn’? That’s what I’d do right now. Y’know, I mean, this guy, if I ever said it, that would be terrible, but he says it, they think it’s so cute. Isn’t it wonderful? Y’know, you’d blow on him, and he’d fall over.”

In 2018, former Vice President Biden reportedly told the University of Miami College Democrats, “They asked me, would I like to debate this gentleman. And I said no. I said, ‘If we were in high school, I’d take him behind the gym and beat the hell out of him.'” He was presumably referring to Trump’s infamous remark about “locker room talk.”

According to CNN, Biden garnered “laughter and applause” from that line.

Addressing both Biden and Pelosi, Trump concluded, “So that’s one of those things that I have to put up with.”

Trump responds to Nancy Pelosi saying on J6 that she wanted to punch him out: “She’s a despicable person. If I ever said that, it would be a national scandal.” pic.twitter.com/FDeLhg5Lic