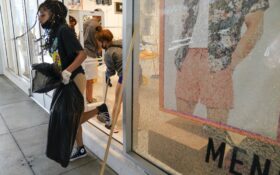 People stealing from a Southern California clothing shop amid widespread unrest became trapped inside as police gathered outside the mostly boarded-up store front.

Video aired by KABC-TV in Los Angeles showed a man kicking his way out a window above the plywood barrier at a store called Outfitters in Long Beach on Sunday.

A woman screamed from inside and then the man climbed over the plywood and dropped to the sidewalk.

He was followed by more than a half-dozen others, with one man throwing out an armload of clothes and then gathering them up and running off as police nearby didn’t attempt to make arrests.

It was unclear how the group became trapped inside. Police didn’t immediately respond Monday to requests for additional details.

Thieves swarmed stores across Long Beach as demonstrators gathered in mostly peaceful protest over the death of George Floyd. Floyd was a black man who died after a Minneapolis police officer held him down with a knee on his neck.

At a nearby Forever 21 store, a steady stream of people emerged carrying armloads of clothing. Some stopped to change into stolen items.