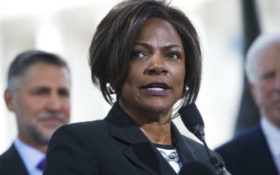 Democrat Val Demings has been campaigning for Senate, representing Florida in the U.S. House, and was close to being then-Democratic presidential candidate Joe Biden’s running mate. Throughout all that, she’s been dogged by her relationship with the police.

Now, Demings has hired a private security detail for her Senate campaign… and her security staff may have just roughed up a journalist on video.

The news outlet Florida Politics obtained a video of two men pushing another man at a park. In the video, one guard says, “Don’t do it.” Another says, “You can’t get up. Stay down.”

A second video soon surfaced on Twitter… and this new video looks even worse.

In this video, the guards were allegedly heard conversing with the victim — a “tracker” who asks politicians tough questions.

Here's the second part of the scuffle in which one of Val Demmings' security guys tells a video tracker after shoving him to the ground "In corrections, I used to bounce people like you off their head in the jail.” pic.twitter.com/00fcY1Khbp

According to Florida Politics, the victim went to a hospital to treat his scrapes and bruises.

The Demings campaign issued a canned response to the scandal.

“Security officials take potential threats and threatening behavior toward the Chief seriously,” Christian Slater, communications director for the Senate campaign, said according to Florida Politics. “In this instance the individual did not respond to multiple requests to leave and charged at security personnel in pursuit of Chief Demings’ approaching vehicle.”

The Demings campaign has spent more than $17,000 on a private security detail called Ardent Protection, according to the campaign’s SEC filings. The campaign last made a payment in late July, about a week before the alleged attack.

Demings previously worked as a police officer herself.

While serving as chief, Demings became mired in scandals. In 2009, she was reportedly disciplined for losing her gun after it was stolen from her police car parked outside her home.

As of 2020, she reportedly has yet to recover the gun.

Demings carried all this baggage with her during her successful run for Congress in 2016. Since then, she has represented Orlando in the House… and she publicly vied for the opportunity to work as Biden’s vice president.

The congresswoman currently stands as the frontrunner in the Democrats’ Aug. 23 primary for U.S. Senate. In November, she will likely face Republican Sen. Marco Rubio, a 12-year incumbent with tons of name recognition.

How many “defund” activists are planning to vote for her in November?