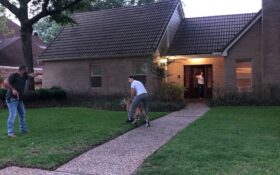 While many celebrated Sunday by honoring mothers all across the country, a shocking encounter gripped a quiet Texas suburb in terror.

A potentially deadly standoff between a man and a Bengal tiger was caught on camera.

Reports surrounding the confrontation say that a tiger had been on the loose in a Houston suburb where a man armed with a handgun came face to face with the fierce animal. Multiple videos from community residents show the armed man slowly backing away from the tiger while aiming at it.

Reporter Michael Schwab posted a video to Twitter, in which a woman witnessed the encounter from her window.

She was on the edge of her seat.

“Straight up stand down right now,” she can be heard saying. “… Because there is a freaking Bengal tiger roaming in this yard and this dude needs to be careful.”

A photo of the scene pic.twitter.com/wRZ4Bk59sY

According to reports, the tiger belonged to a resident living on the block where the standoff occurred.

In another video, the man wielding the gun can be heard shouting at the alleged owner of the animal.

“Get the f–k back inside. F–k you and your f–king tiger,” the man is heard saying.

Another voice in the background, purportedly the owner, says “I’ll get him, I’ll get him.”