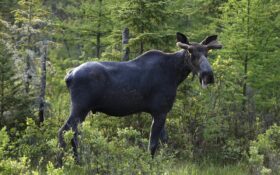 A Utah state trooper has helped a pair of newborn moose calves reunite safely with their mother after spotting them on a mountain road.

The trooper noticed the hours-old calves without their mother on the road as he drove home from work, about 45 miles (70 kilometers) east of Salt Lake City on Monday, said Utah Highway Patrol Sgt. Nick Street. It’s not clear how they became separated.

Utah Highway Patrol troopers helped a moose family out of danger. Troopers in Summit County used their patrol vehicle to urge a mamma moose and her two calves to move off the roadway to safety. (May 19)

Worried they could be hit by a car, trooper Alexander Agin stopped and put up a traffic barrier. Once he was out of his car and walking, the baby moose began to follow him. So Agin decided to guide them away from the traffic danger.

Just as he led them off the road, the calves’ mother arrived — and began to charge him.

“He knew not to be getting between those calves and their mother,” Street said. Agin quickly retreated to his patrol car and recorded a quick video of the moose family reuniting and walking into the trees.

You can see a video of the state trooper’s encounter with the moose below: