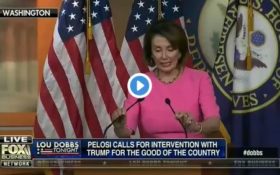 President Donald Trump shared a Fox News Business video from “Lou Dobbs Tonight,” of a recent press conference with House Speaker Nancy Pelosi — and it has thousands of social media users wondering, “Was she drunk?”

The video, which has reportedly been slowed down, shows Pelosi stuttering and struggling to form sentences. It left Dobbs and his guests questioning the mental wellbeing of Pelosi.

Trump shared the video on Twitter after questioning Pelosi’s ability to do her job. On other social media outlets, the footage has been banned.

“She’s a mess, look, let’s face it,” Trump said, accusing Pelosi of not understanding the pending United States-Mexico-Canada Agreement on trade. “She does not understand it. And [administration trade officials] sort of feel she is disintegrating before their eyes.”

Trump’s not alone in questioning Pelosi’s ability to do her job.

Sen. Lindsey Graham, R-S.C., called Pelosi “delusional” on Thursday. Graham implied that either her grip on reality was slipping, or she was lying to everyone about her plans for Trump and impeachment.

The video has become extremely controversial. Mainstream media outlets like CNN and MSNBC are claiming the video was faked. Others, like The Washington Examiner, called the video a “light-hearted” political jab that was being taken too seriously.

Is Pelosi drunk in the above video, or was the video faked?

Is Nancy Pelosi drunk in this video, or is it faked?