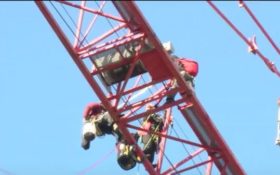 Police say protesters are climbing a crane at a downtown Washington construction site that’s just a few blocks from the White House.

Brown says protesters, possibly seven people, are at the site, climbing a crane and refusing to allow workers to work in the area.