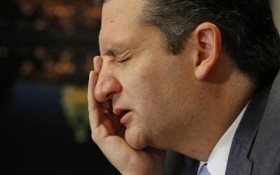 A group of extreme protesters disrupted a dinner on Monday night between Senator Ted Cruz and his wife at a restaurant in Washington D.C., and the disturbing scene was posted to social media.

The mob of angry alt-left were seen screaming at Cruz over his supposed friendship with Supreme Court nominee Brett Kavanaugh.

The viral videos are each only one-minute-long and feature a banner that reads, “Smash Racism” — leading to many Americans pointing out the irony that a Latino senator was chased out of a restaurant by white protesters who claim to be against racism.

In the first clip posted by the group’s Twitter page, protesters approach Cruz, who is Cuban-Americans, and chant “We believe survivors!”

One woman could be heard off camera saying, “Hi, I’d love to talk to you about Brett Kavanaugh tonight. I’m a constituent, love to know what your vote is gonna be tonight. I know that you’re very close friends with Mr. Kavanaugh. Do you believe survivors?”

She continued, “Senator, I have a right to know what your position is on Brett Kavanaugh.”

“Bless you as well, I really appreciate you,” the woman replies. “I’m a survivor of sexual assault. I believe all survivors. There are now three people who have come forward and who have said that Brett Kavanaugh has attacked them. I know that you’re close friends with him. Could you talk to him about that? Could you talk to him about his position?”

Cruz and his wife are then seeing putting their coats back on to prepare to exit the restaurant.

The group, “Smash Racism DC” posted a second video to Twitter showing Cruz and his wife struggling to get through the protesting crowd.

One protester could be heard off camera shouting, “Beto’s way hotter than you, dude!” in reference to Beto O’Rourke, Cruz’s challenger for his Senate seat.

Another member of the howling mob shouts: “Sexist, racist, anti-gay!”

The video concludes with the group cheering as Cruz exits, and the restaurant staff asking the mob to leave.

This is not the first time that protesters have targeted Republican politicians and commentators. Specifically, a group of white protesters screamed at African-American conservative commentator Candace Owens to leave a restaurant in August.

Cruz has spoken out on the Kavanaugh accusations stating that he believes the allegations deserve to be “treated with respect” and that his accuser “should have a full opportunity to tell her story.”

His office has not yet responded to requests for comment on the disturbing Monday night confrontation.