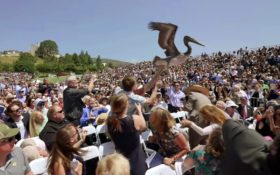 A pair of pelicans majoring in curiosity crashed a graduation ceremony at Pepperdine University in Malibu.

The brown, dive-bombing birds joined the class of 2018 on Saturday as graduates were receiving diplomas on a lawn overlooking the Pacific Ocean.

A video shows one of the big birds landing among seated observers who managed to toss it back into the air, only to have it land on a red carpet at the center of the ceremony.

One bird snapped its long beak at the hand of an official who tried to grab it.

Eventually both birds were shooed away and waddled off.