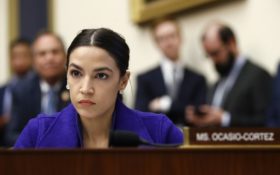 So far Rep. Alexandria Ocasio-Cortez, D-N.Y., has run her mouth from a distance from voters. Whether it be from the House floor or on Twitter, Ocasio-Cortez doesn’t have to face real Americans when she comes up with another hairbrained idea.

But her latest, sleazy comments about the Veterans Affairs (VA) has her in hot water.

Ocasio-Cortez said that there was NOTHING wrong with the VA… and in turn, angry veterans are now speaking out against the New York socialist.

One veteran in particular, Joe Biggs, directly called for the expulsion of the Bronx congresswoman with a passionate response on Twitter.

If the VA is fine, Biggs mentions, then why are Veterans blowing their heads off in the parking lot, right outside of hospitals?

“Make Alexandria bartend again,” he said during his rant. “You need to be expelled from Congress. You do not belong there.”

Former Navy SEAL Eli Crane spoke to the Washington Examiner about how absurd Ocasio-Cortez’ words were, given the fact that she’s trying to hand everything out for free — but refuses to fix a broken system for the people who have earned it.

“I would love to see her tell that to the family members of veterans who died waiting for treatment from the VA,” said Crane. “As veterans, we deserve the same rights that private citizens have to shop around and find healthcare options, doctors and providers that fit our medical needs.

The numbers tell a gruesome truth about the VA – and once again Ocasio-Cortez badly missed the mark.

The Atlanta Journal-Constitution recently outlined the horrors that Veterans face. Of the alarming facts, a few stand out: More than 6,000 suicides took place every single year from 2008 to 2016, and from 2005 to 2016 suicides rates among veterans skyrocketed by nearly 26 percent.

Or perhaps she just doesn’t care.