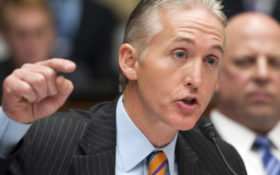 But there was one question from Trey Gowdy that left Johnson speechless.

Johnson revealed to the panel that after being hacked, the DNC didn’t turn their servers over to law enforcement.

It’s puzzling to say the least, and Gowdy wasn’t going to let it go unquestioned.

“They weren’t going to give you the server. So, if you’re investigating from a law enforcement standpoint the hacking by a foreign hostile government, wouldn’t you want the server? Wouldn’t that help you, number one, identify who the attacker was? If memory serves me, this was early in the summer of 2016 when we learned of the DNC hacks.”

And that’s when he slammed the DNC for not assisting in the hacking investigation, and asked Johnson an answerable question.

“So, if they had turned the server over to either you or (ousted FBI Director James Comey), maybe we should have known more. And maybe there would have been more for you to report.”

“Why would the victim of a crime not turn over a server to an intelligence community or to law enforcement?” he asked.

A reasonable question, but Johnson found himself without an answer.

“I’m not going to argue with you sir. That was a leading question, and I’ll agree to be led,” Johnson replied.

His response proves that he knows Gowdy is right, and that the DNC impeded on the Russian investigation by not turning over their servers.

BOOM! Trey Gowdy stumps Jeh Johnson: "If they were hacked, why didn't the DNC let the FBI look at their servers?" pic.twitter.com/gzJyBTCr01

Johnson also proved that, although Russia meddled in the election, they had no effect on the final result of President Donald Trump’s victory.