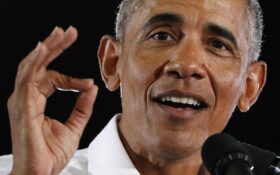 Former President Barack Obama has embarked on a multi-state tour to frame the 2022 midterm elections as a referendum on democracy and to urge voters not to see Republicans as an answer to their economic woes.

Obama went viral a few times… but not for the right reasons.

In Detroit, Obama dealt with hecklers in the audience.

The former president was giving a speech about “elected officials” encouraging “supporters to stand outside voting placed armed with guns.”

When we don’t just disagree with people but start demonizing them, making wild, crazy allegations about them, that creates a dangerous climate.

And if elected officials don’t do more to explicitly reject that kind of rhetoric, if they tacitly support it or encourage their supporters to stand outside voting placed armed with guns, dressed in tactical gear, more people could get hurt.

One pacifist heckled Obama from the audience. “Mr. President, there’s more people that are going to get hurt if we go into nuclear war right now,” the audience member said, referring to rumors about Russia’s tactical nuclear weapons for its war in Ukraine.

Obama responded with his typical method: a lecture about the niceties of public disagreement.

“Sir, this is what I mean,” Obama said, over a cheering crowd.

“There is a process that we set up in our democracy. Right now, I’m talking. You’ll have a chance to talk sometimes soon. You don’t have to shout. It’s not a good way to do business, you wouldn’t do that in a workplace. You wouldn’t just interrupt people in a conversation. This is part of the point that I’m making. Just basic civility — and courtesy — works.”

Obama faced criticism from not only this pacifist heckler but also from some left-wing fans of Russian dictator Vladimir Putin.

“You overthrew legitimate Ukraine in 2014,” one protestor chanted at Obama. “Russia is not the enemy.”

However, these Putin fans apparently failed to grab Obama’s attention.

My friends @AnastasiaMares1 & @sbattle11 Called out the bloodthirsty @BarackObama today in Michigan for his role in instigating the Ukraine conflict . @IlhanMN you want to know how the US started the conflict in Ukraine? Pay attention. pic.twitter.com/dR1yJEIOlm

In the last week, Obama has campaigned for down-ballot Democrats not only in Michigan, but also in Georgia, Nevada and Wisconsin.

During Obama’s warp-speed tour of swing states, some left-wing critics accused him of ignoring politics during the entire presidency of Donald Trump.

Of course, conservatives have been criticizing Obama’s campaign speeches, too. Some Twitter users have turned the heckler into a meme.

Note: The chant has been added in. You can see the original here.