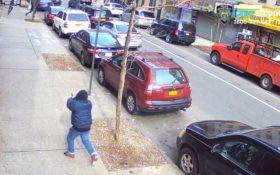 A teenager has been charged with opening fire on a crowded New York City street, sending several people running for cover.

A video circulated by the New York Police Department showed bystanders including a little girl running as the gunman fired several shots in the Bronx on Feb. 22. No one was hit by the gunfire.

Police say 16-year-old Edgar Garcia was arrested Friday and is suspected of being the gunman in the video.

Police say Garcia was aiming at another man who was down the block.

Garcia faces charges including attempted murder, criminal use of a firearm and reckless endangerment. It’s not clear if he has and attorney who can speak for him.