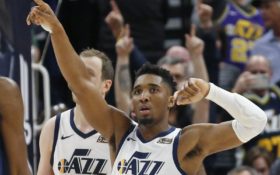 It took a bear — Jazz Bear — to catch a bat and leave the high-flying hijinks to the NBA players.

A wayward bat flew around the court inside the Vivint Smart Home Arena about an hour before Utah’s game against the Minnesota Timberwolves on Friday, interrupting the pregame shooting routines of the likes of Jazz stars Donovan Mitchell and Ricky Rubio.

The few thousand fans in the building took turns cheering and then groaning while watching the flying mammal zip around the arena and elude several security guards and an on-court employee armed with a net.

Nobody can catch this bat flying around the arena ahead of the Jazz-Timberwolves tip-off, not even Jazz Bear. pic.twitter.com/U5obXEwmw5

Jazz Bear took a break from entertaining the crowd by taking a few swings himself before finally capturing it — with nothing but net.

Fans then cheered wildly as the proud mascot strolled off the court with the big catch.

“That was scary,” Mitchell said after Utah’s 106-101 victory . “I was not cool with that at all. I’m glad the Bear got him because I would not have finished my warmup. I would have gone to locker room if he was still flying around out there.”

The whole thing quickly became a social media hit, and Los Angeles Lakers forward Kyle Kuzma appropriately tweeted : “Where is Manu when you need him.”

That, of course, is former San Antonio Spurs star Manu Ginobili, who famously swatted a bat to the hardwood and captured it in the middle of game against Sacramento on Halloween night in 2009.