Video: Nancy Pelosi had a post-RNC meltdown - The Horn News 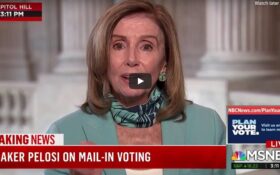 House Speaker Nancy Pelosi didn’t care for the opening night of the Republican National Convention — and she went on MSNBC to tell America what she thought about President Donald Trump’s supporters.

“We take an oath to protect and defend the Constitution from all enemies, foreign and domestic,” Pelosi said. “And sadly, the domestic enemies to our voting system and honoring our Constitution are right at 1600 Pennsylvania Avenue with their allies in the Congress of the United States.”

Pelosi said Trump is to blame for the problems with the U.S. Postal Service’s budget problems — and it’s because Republicans want to stop Americans from voting.

“But again, let’s just get out there and mobilize, organize, and not let the President deter anybody from voting,” Pelosi continued. “And again, support the postal system which is election central.”

“They’re doing everything they can, suppress the vote — with your actions, scare people, intimidate by saying law enforcement will be there, diminish the role of the postal system in all of this. It’s really actually shameful,” she said.

“Enemies of the state,” Pelosi concluded.

The White House responded by saying Pelosi was pushing “bizarre, baseless conspiracy theories [that] are harmful to our democracy.”

“President Trump is focused on ensuring a fair election as he continues to lead this Nation safely out of this global pandemic, bringing the country together with a message focused on American greatness and a safe and prosperous future for all,” Judd Deere, a White House spokesman, said in a statement.

You can see video of Pelosi’s statement below —