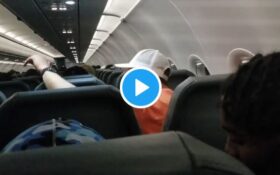 Incidents of unruly passengers having violent confrontations with airplane crews and other passengers are on the rise — and one man’s freakout on a recent Frontier flight may be the worst yet.

According to a report by ABC News’ Sam Sweeny, 22-year-old Max Berry was arrested in Miami on July 31 after an unruly outburst.

Berry allegedly groped two airline attendants, then screamed at other passengers that his parents were worth millions of dollars.

He later reportedly punched a male flight attendant before being restrained.

The report said that the flight crew was forced to duct tape Berry down in his seat — but surprisingly, Frontier announced that the crew had been suspended after the incident.

Video of the mayhem went viral on social media after Frontier announced the crew’s suspension.

Because the flight attendants duct-taped his chest — and not his hands — Sweeney reported the crew had been suspended pending further investigation.

“During a flight from Philadelphia to Miami on July 31, a passenger made inappropriate physical contact with a flight attendant and subsequently physically assaulted another flight attendant,” Frontier Airlines said in a statement.

“As a result, the passenger needed to be restrained until the flight landed in Miami and law enforcement arrived. The flight attendants will be, as required in such circumstances, relieved of flying pending completion of investigation of the events.”

You can see the video — including Berry being duct-taped to the chair — here:

Frontier passenger allegedly touched 2 flight attendants breasts, then screamed his parents are worth $2 million, before punching a flight attendant. Frontier suspended the crew for duct taping the passenger to his seat as they landed in Miami. 22 yr old Max Berry is in custody. pic.twitter.com/4xS9Rwvafx

[Video] What fell out of Joe Biden’s pocket?