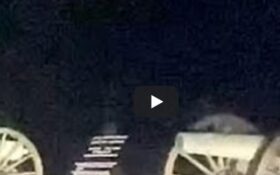 A man says he captured two ghosts on camera at the Civil War battleground of Gettysburg — and the footage quickly went viral.

Greg Yuelling, 46, told The Sun that he and his family were touring the site “to learn more about the history of the Civil War and see the old battleground where the Gettysburg Address was given.”

Yuelling said that when driving towards the strange fog, two shapes “the size of humans” suddenly ran across the field near a memorial.

He said his uncle was so scared that he immediately rolled up his window, and when the two got home they enlarged the video and watched it repeatedly.

“It was really exciting, but I also got this strange, ominous feeling, like something was telling me to go back there,” Yuelling told The Sun.

As many as 51,000 Americans died in the brutal three-day battle that marked the turning point in the Civil War in July 1863. Among the dead were an estimated 28,000 Confederate soldiers.

Using the high ground near the Pennslyvania town of Gettysburg to his advantage, Union Gen. George Meade enticed Confederate Gen. Robert E. Lee into numerous costly attacks. Lee’s famous order for Gen. George Pickett to charge into the center of the Union lines on the last day is widely regarded as one of his biggest blunders of the war. After the defeat, Lee’s Army of Northern Virginia was forced to abandon their invasion of the North and retreat.

The furthest point the rebel forces reached during Pickett’s Charge before being turned back is known as the “High-Water Mark of the Confederacy.” Lee and his army would never recover from the blunder, and his surrender in 1865 effectively ended the largest theater of the Civil War.

What do you think? Does the video show that the restless spirits of two of those fallen soldiers are still fighting 155 years later?

Or does the footage just show a weird bit of fog and an overactive imagination?

As for Yuelling, he believes he captured definitive proof of the ghosts that haunt the storied battlefield.

“I always questioned the validity of those ghost videos you see on TV, I was always pretty disbelieving,” Yuelling said.

“I believe everything now,” he told The Sun.

Take a look below and decide for yourself —