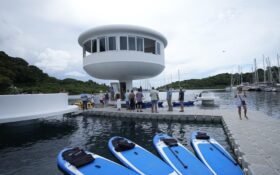 The unveiling of a futuristic luxury model home on Panama’s Caribbean coast tanked Thursday when the SeaPod Eco prototype perched above the water on a column slumped onto an adjacent dock.

Developer Ocean Builders said in a statement that the sleek white home began to “destabilize” at the end of the launch event.

It said no one was injured and the cause was being investigated.

The home that is reminiscent of a space ship sits well above the water and features expansive views from a row of windows.

The developers had planned to begin offering the homes for sale next year, touting them as friendly to the environment and the economy.

A video appearing to depict the incident went viral on Twitter.