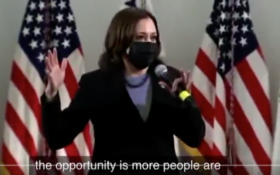 American parents are struggling…. and the Vice President laughed it off.

When Vice President Kamala Harris had previously been asked if she was going to the U.S.-Mexico border where a surging illegal immigrant crisis is emerging, and she laughed.

This week she’s still laughing but for a different reason.

She was on tap discussing parents struggling amid the COVID-19 pandemic and the importance of child education — all very serious matters indeed.

“… more people are seeing,” she started, “that ‘yeah, affordable child care is a big deal.'”

“More parents are seeing the value of educators when they had to bring their kids,” she said when she began laughing. “And say we’re not nearly paying them enough.”

“There are millions of working parents who must think it’s hilarious that they can’t send their children to school this morning,” @Mythinformed MKE.

Apparently, she finds this all hilarious.

It’s no secret that parents — particularly single parents — are facing major struggles when it comes to caring for their children and navigating the child care system. Perhaps even worse, the many lockdowns across the world have taken a major toll on the mental health of families.

Still, Harris joked about it.

Of course, this isn’t the first time Harris has laughed off a very serious issues…

"There are thousands of kids in cages on the border. Laugh or cry?"

Normal people: "What the hell do you mean 'laugh!?'"

Only time tell what other tragedy she may laugh about.